"Failure doesn't mean you are a failure. It just means you haven't succeeded yet."
- Attributed to Robert Schuller
Several years ago, I took my youngest two children to a lake in the mountains not too far from our home with the hope of landing a fish or two for dinner. Of course, growing up, my fishing experience sometimes entailed using a piece of old cheese or baloney on a rusted hook in a creek near my house. Sometimes, I was able to catch a sunfish or two, but I never really had the knack or skill to catch some more sporting game. 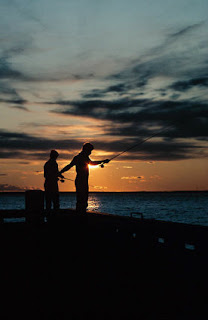 My kids and I were full of enthusiasm to land some nice trout that day, and from the start, the fishing was somewhat flow. People around us seemed to be having some success, but again, I was never the best at baiting a hook and knowing where to go looking for the best fishing spot. As the evening progressed, we moved to a different place along the bank of the lake and finally we caught a nice rainbow trout. The kids were thrilled at reeling in the single fish we caught that day, and they put it in a bucket with water to watch it. Having no other luck, we decided to call it a day, and the prospect of having the fish for dinner was definitely on their minds. Then, as we were preparing to leave, I decided to empty the water from the bucket to take the fish home, and in the process, I accidentally pour out the fish and he happily swam away.
At that moment, you could see my kids' countenances change in a second from exuberance and glee to total despair. "Man, Dad. You really ruined OUR day. Can't you get ANYTHING right?" Or at least, I thought they were going to say that. We didn't have more time to fish, and the thought or returning home empty handed weighed on me.
After of few moments of awkwardness and disappointment, I told them not to worry and that we would simply go to the store and buy some great seafood to replace it (which I think turned out to be shrimp and crab legs---an expensive alternative).
Now, in life, disappointment will come to all of us sooner or later. We can stop its hand from touching our lives, and in many cases, we won't be able to substitute the suffering with some grocery items as I did on our fishing trip. Feeling upset and disappointed is a natural feeling, and just telling someone not to feel that way denies the reality of the feelings. However, how we respond and react to those feelings is the key. Do we simply waddle in self pity, or do we make efforts to see such events as stepping stones to better understanding of life events?
Since that time, our family has seen our share of unique challenges, as the majority of people on this planet, and in many ways, I am grateful for each lesson these trials have taught me.
at August 22, 2010

Email ThisBlogThis!Share to TwitterShare to FacebookShare to Pinterest
Labels: Disappointment